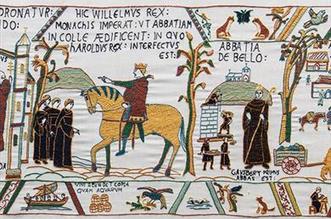 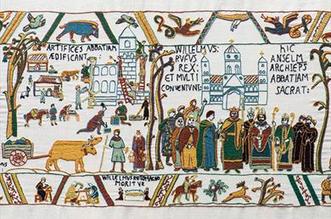 Displayed on the central beam of the Lower Gallery is a replica of the Battle Tapestry. It was created in 2016 by local artist Tina Greene and 741 volunteer stitchers from Battle, from elsewhere in the UK and beyond. Research was done by the Battle and District Historical Society.

The Battle Tapestry is modelled on the Bayeux Tapestry, which was created after the Battle of Hastings. You will see some scenes from the Bayeux Tapestry on display in the Museum as original tapestries: one by Tina Greene dating from 2016, and others by C V Stevenson dating from 1902. Also on display above Case 8 is the inspiration for the Battle Tapestry: a replica of the Alderney Tapestry, created by the citizens of that island in the early twenty first century, to show the coronation of William – a scene possibly missing from the damaged original.
Further reading: Tina Greene’s book about the making of “ The Battle Tapestry” is £15 in the Museum shop and in Rother Books.
The Bayeux Tapestry Embroiderers’ Story by Jan Messent, price £15 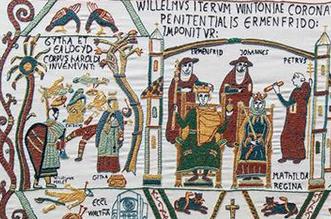 4 The first Abbot in 1076, after the Abbey church is finished​

​5 Master craftsmen come to build the rest of the Abbey.
6 The Abbey is consecrated in 1095
7  Development of the town, showing local trades

​The tapestry shows events after William won the Battle of Hastings on 14 October 1066; and how the town of Battle grew up around the Abbey, which marks the spot where William believed Harold fell. It was almost 30 years before the Abbey was consecrated and it was not until 1115 that St Mary’s Church was finished for the use of local worshippers: it’s there that the original of the Battle Tapestry is housed. It can be visited whenever the church is open.

​The Tapestry features eight scenes:
1 The search for King Harold’s body
2 William is re-crowned in 1070 at Winchester by Ermenfrid who imposes a Penitential Order.
3 William insists that the Abbey is built on the hill where Harold was killed.